The COVID-19 pandemic has definitely hit my life in 2020, especially our travel plans through out the year. We have been looking forward to a trip to Great Smoky Mountains led by REI Adventures for almost a year, and it got cancelled; We had a trip to New Orleans LA and it was cancelled due to the Hurricane Delta. While planning next trip for the holiday season, I didn’t want another cancelled trip. Fortunately at that time, Florida was pretty opened up 100%, and the political climate makes it much more possible to stay that way than any other states. And there are not many better vacation destinations in the winter than Key West FL.

We were flying from San Jose to Key West. The flight I booked initially was a perfect time – not too early in the morning and not too late arrival in Key West. However (thanks to the pandemic) the flight got changed and the departure flight from San Jose was super early in the morning, like 5 AM. So I changed it again but I had to fly out a day earlier and stay overnight in Houston. Not too bad. I’d rather have a slow and enjoyable vacation than starting it by waking up 3AM to catch a damn flight.

Get to Know Conch Republic

It was not too dark when we arrived at Key West airport. It was a really nice view when the plane was approaching – A lot of small islands scattering on the canvas of the ocean. Walking to the terminal I saw the big sign on top of the building: Conch Republic. That was the first time I’ve heard about that name. According to Wikipedia:

The Conch Republic (/ˈkɒŋk/) is a micronation declared as a tongue-in-cheek secession of the city of Key West, Florida, from the United States on April 23, 1982. It has been maintained as a tourism booster for the city. Since then, the term “Conch Republic” has been expanded to refer to “all of the Florida Keys, or, that geographic apportionment of land that falls within the legally defined boundaries of Monroe County, Florida, northward to ‘Skeeter’s Last Chance Saloon’ in Florida City, Dade County, Florida, with Key West as the nation’s capital and all territories north of Key West being referred to as ‘The Northern Territories'”.

While the protests that sparked the creation of the Conch Republic (and others since then) have been described by some as “tongue-in-cheek”, they were motivated by frustrations over genuine concerns. The original protest event was motivated by a U.S. Border Patrol roadblock and checkpoint that greatly inconvenienced residents and tourists.

The Conch Republic celebrates Independence Day every April 23 as part of a week-long festival of activities involving numerous businesses in Key West. The organization—a “Sovereign State of Mind”, seeking only to bring more “Humor, Warmth and Respect” to a world in sore need of all three according to its late Secretary General, Peter Anderson—is a key tourism booster for the area.

Some little history about “Conch Republic”

The airport is super small, and very easy to get around. After settling down in hotel, we went out for food. Key West downtown is along Duval Street, where there were a big crowd and a lot of nice restaurants. That was the biggest crowd in one place I’ve seen in the pandemic. People seemed to live their lives as soon as they arrived at Key West.

When I was planning for what to do on the island, I looked at Fort Douglas, and all water plane tickets were sold out. I still wanted to do some water sports, and kayaking seems to be pretty nice. So I booked Lazy Dog Kayak which totally exceeded my expectation.

While it was in the afternoon, we had a nice breakfast with delicious key lime pie. With the breakfast restaurant not far from the dock, we saw the check in place for the glass bottom tour, and we decided to book one for tomorrow.

We just decided to walk around the island. It’s not a huge place, but it’d be nice to rent a bike. We decided to walk to Fort Zachary Taylor State Park. I really love the architecture in Key West – wrapped around porch with vibrant colors, or just simply white. It fits right in the tropical climate and makes me feel this place is where it’s supposed to be. 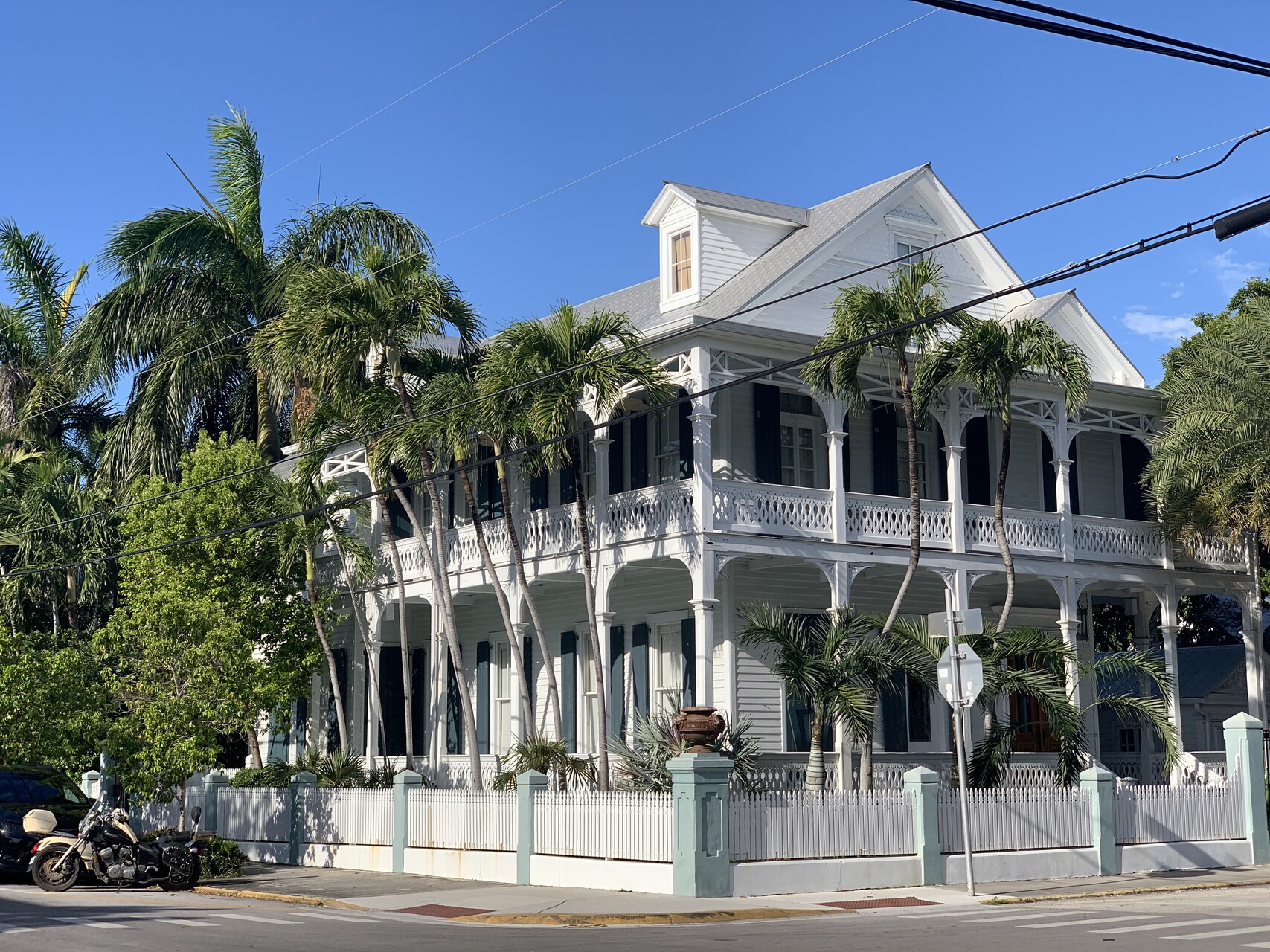 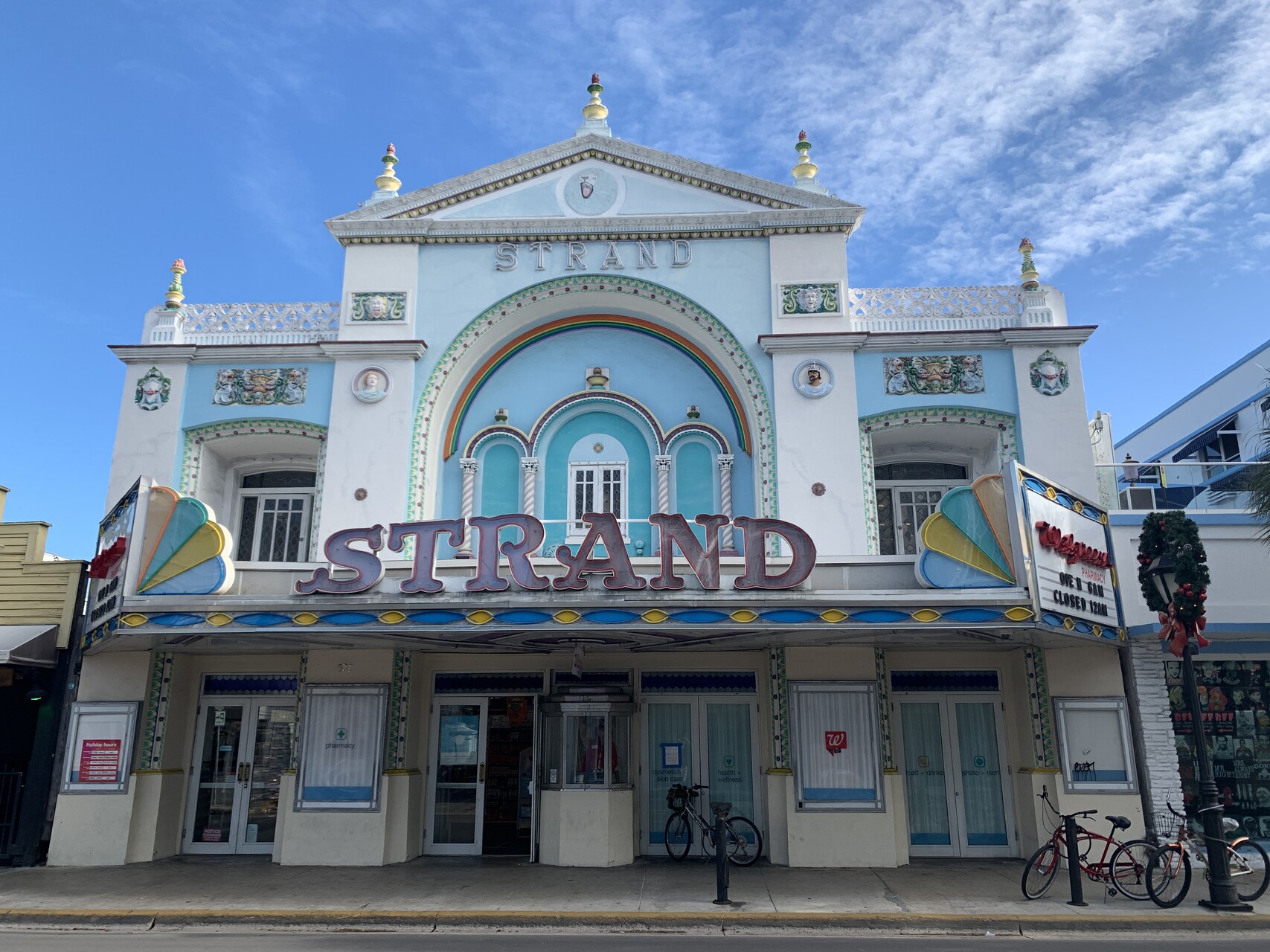 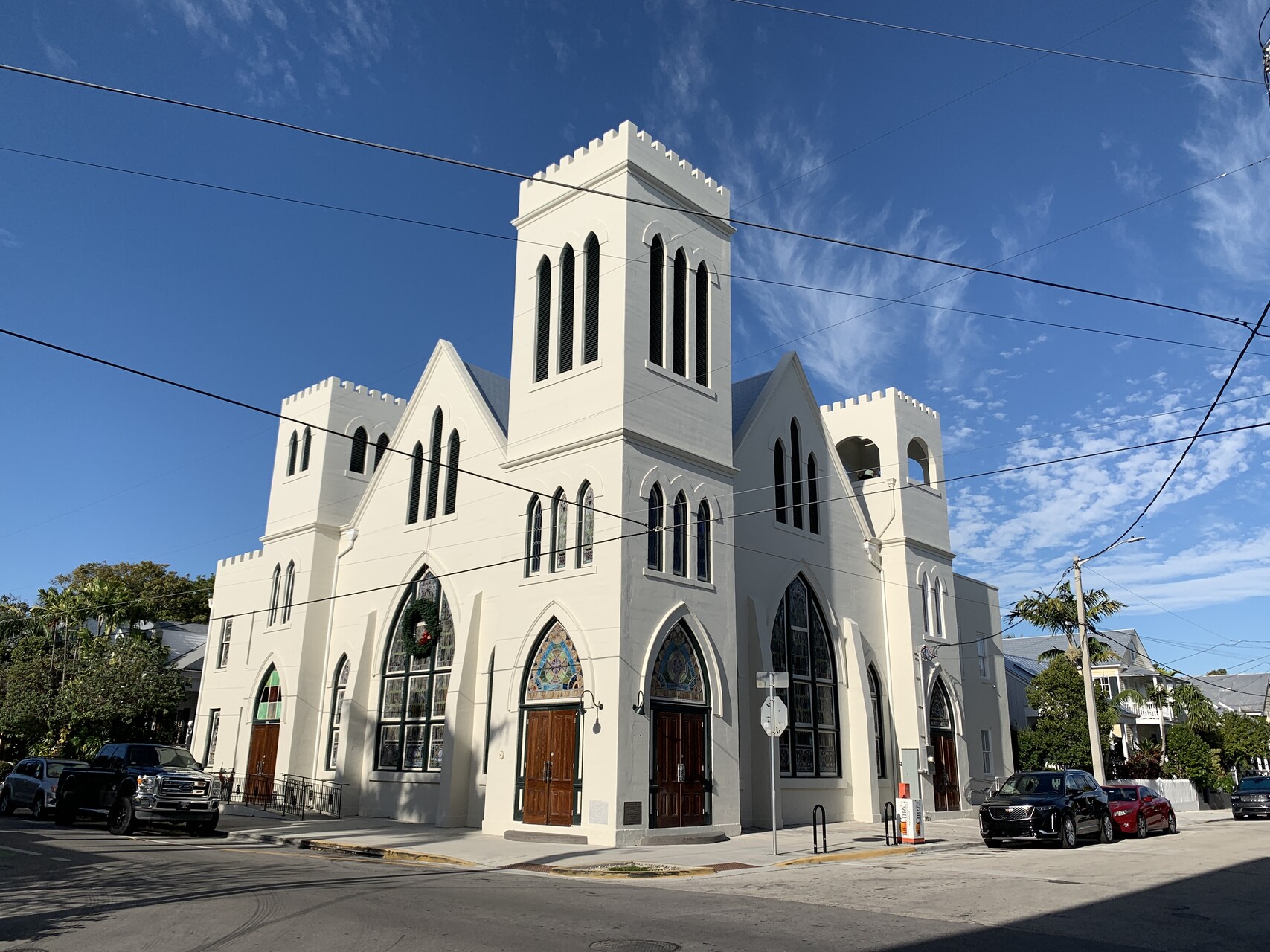 There were a group of chickens running around the streets, right in the city. They were eating something on the grass, just like no one was around. It’s very interesting to see chickens around. Not sure if they were wild or not.

Fort Zachary Taylor was named after a US president, who died only one year after he was elected. The park has a nice beach and the fort. We didn’t plan to be on the beach so we just looked around, and then walked on the fort.

It definitely has a lot of history – built in Civil War era, and was heavily used in Spanish-American War, World War I, II and Cuban Missile Crisis. Since 1947 it was maintained by US Navy and then became a public park.

The fort was discovered to have the most Civil War era cannons. It’s a very nice view of the bay and the surrounding area on top of the fort, including a US Coast Guard ship. 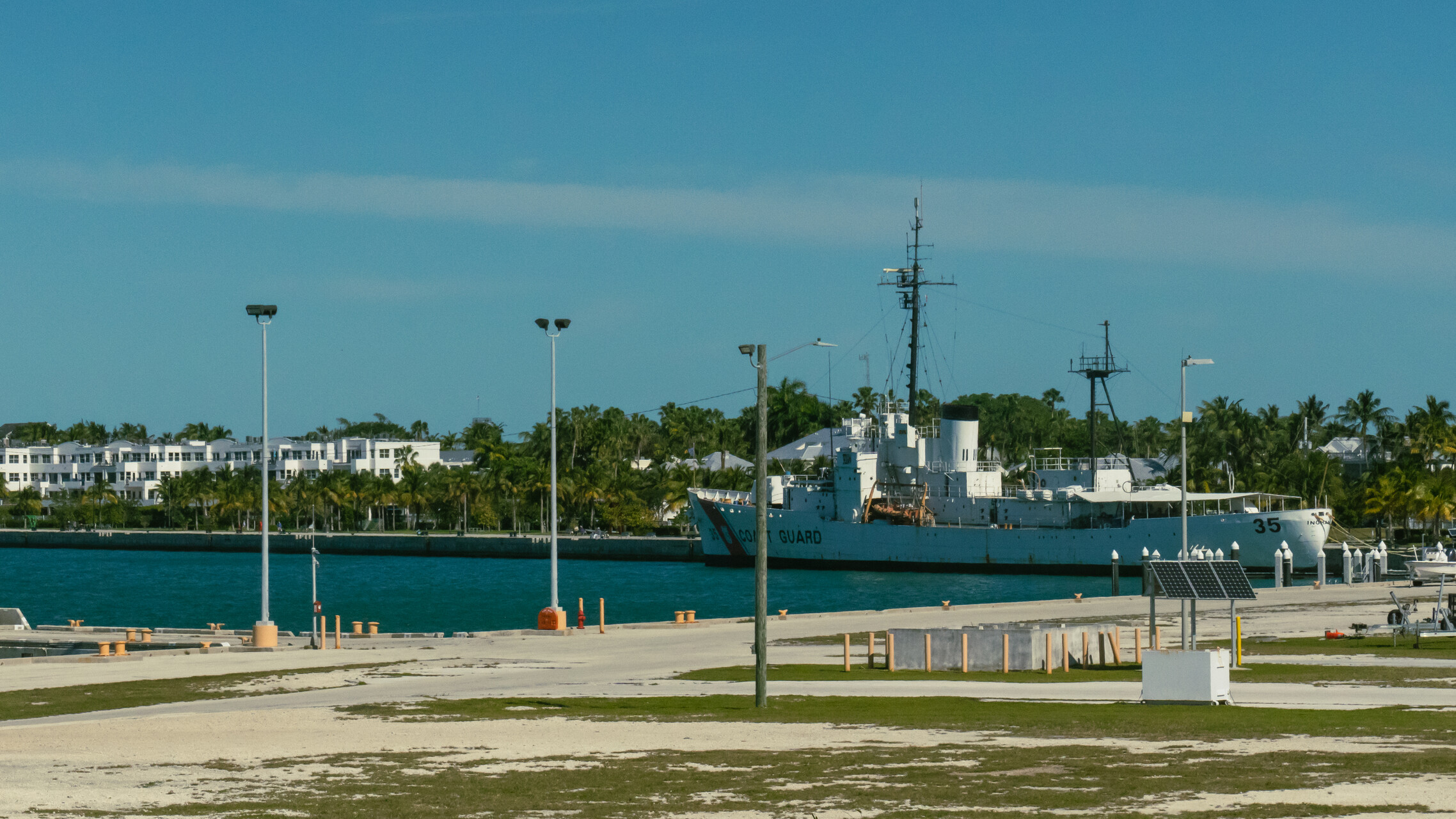 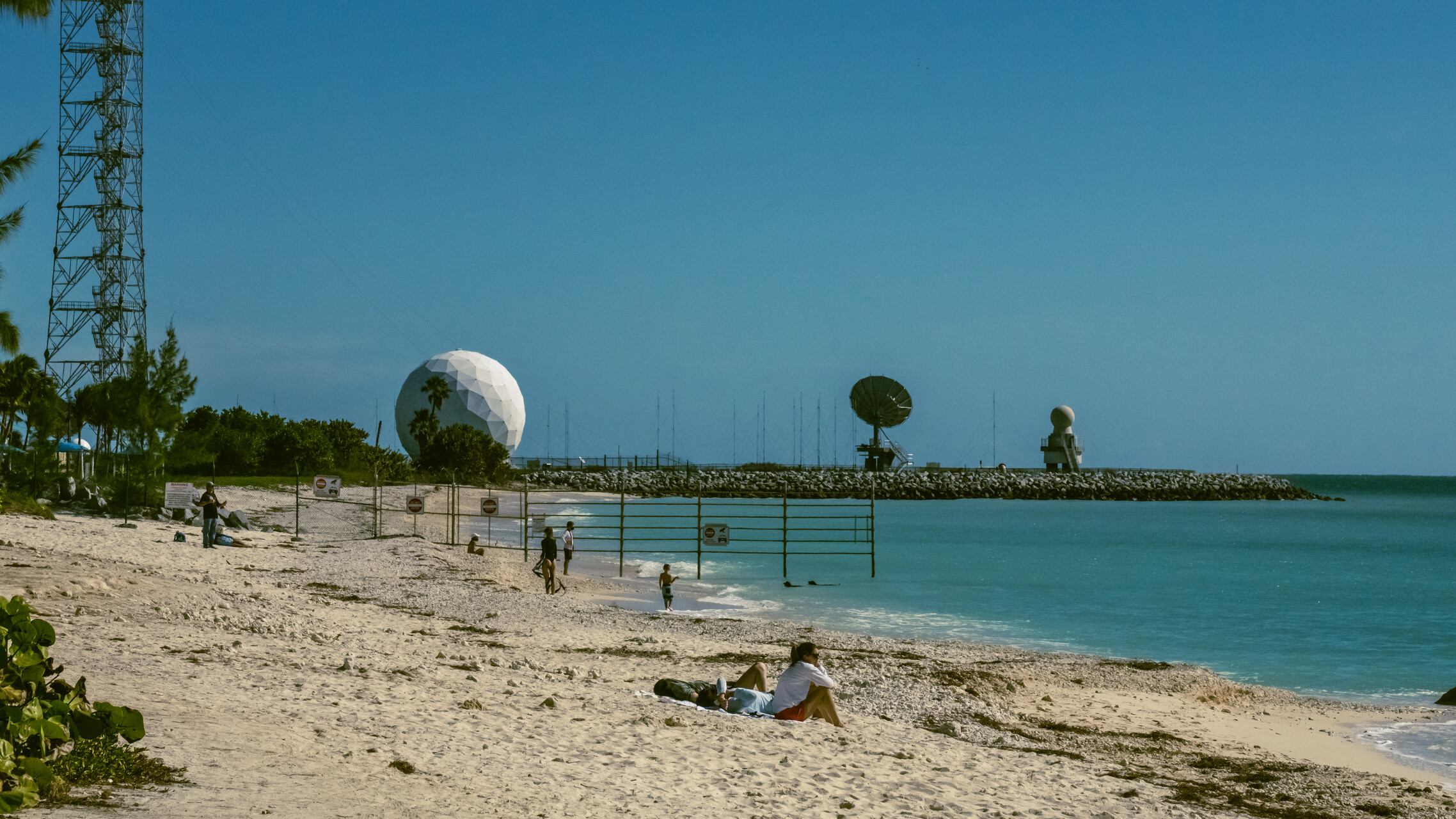 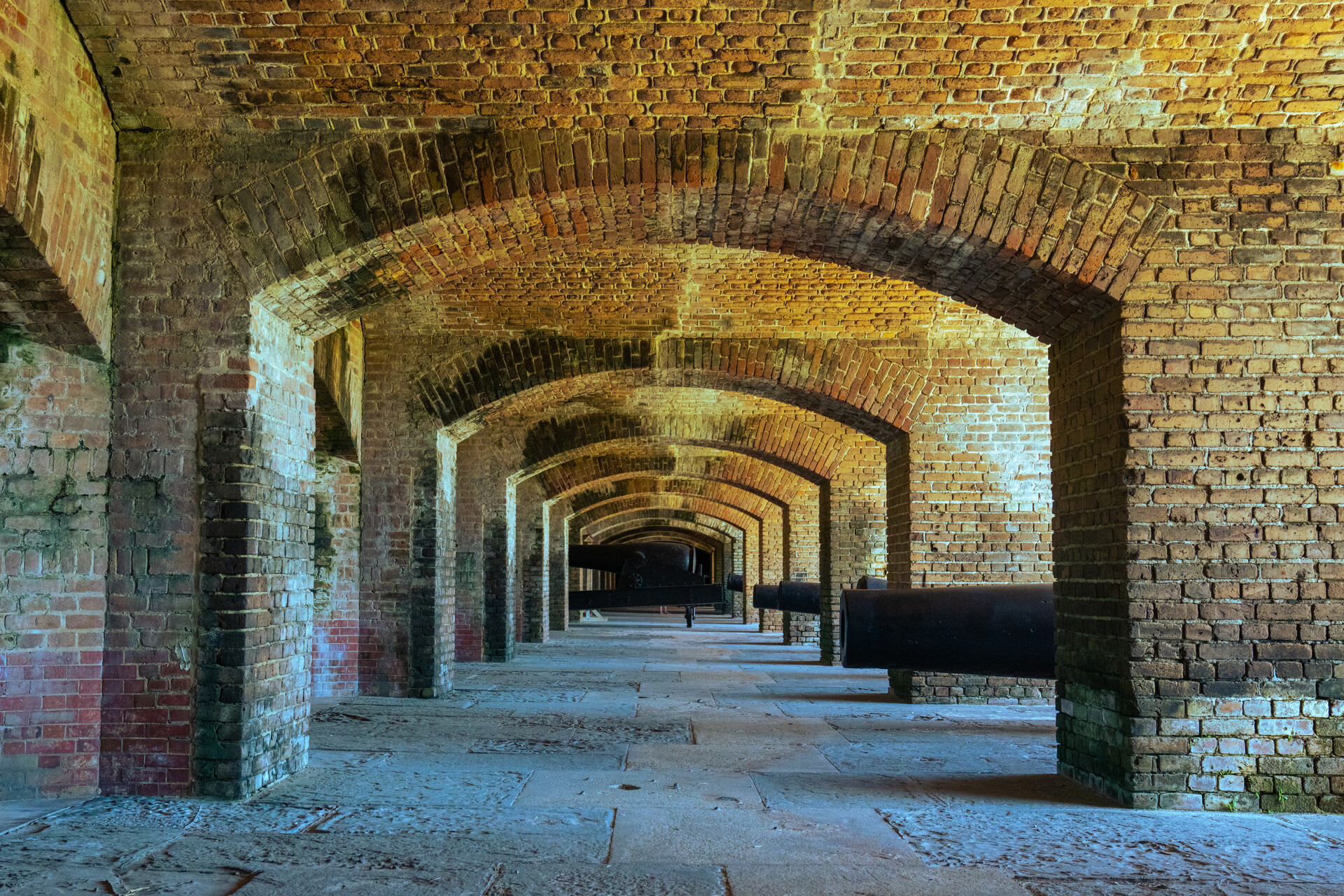 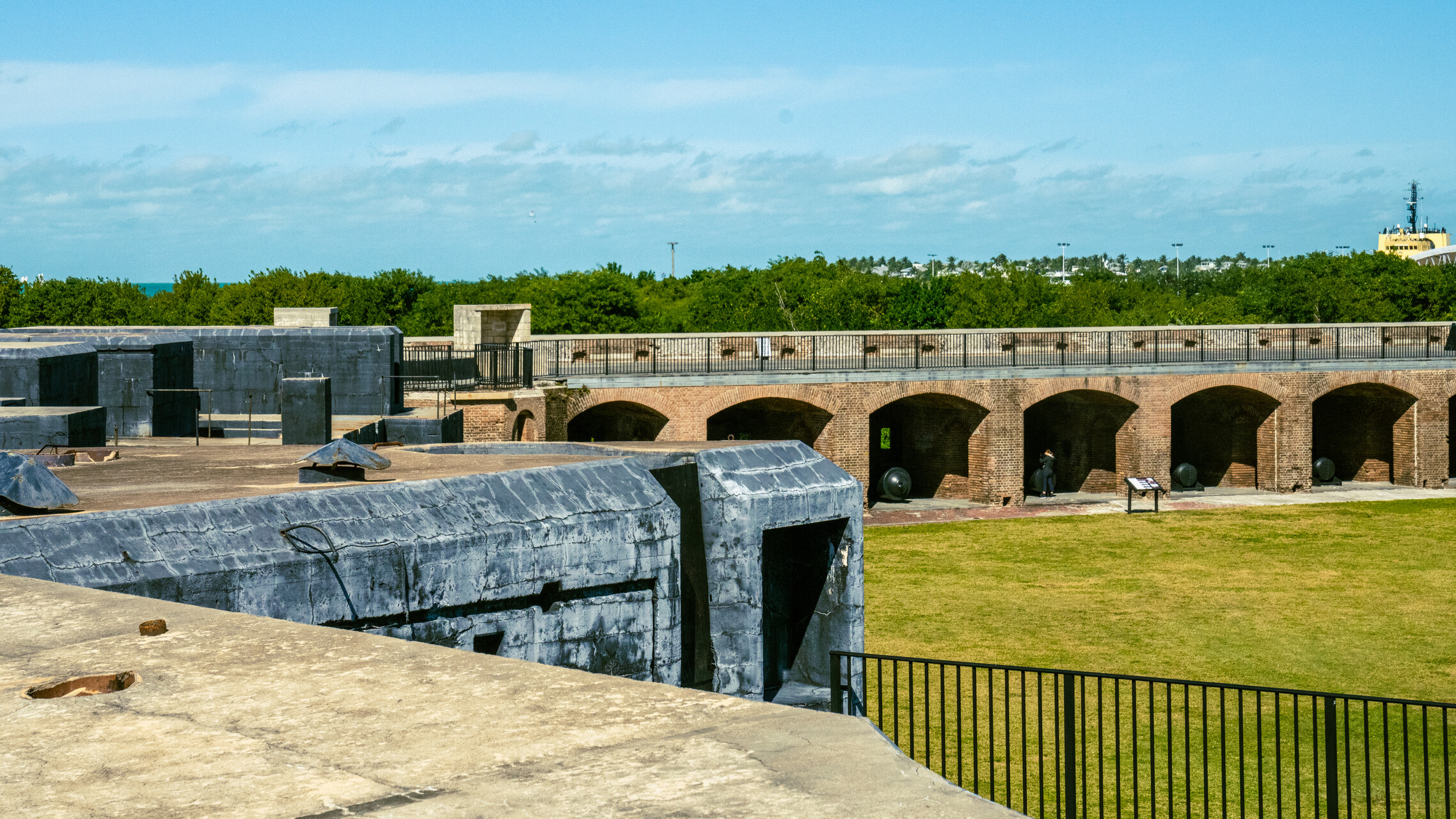 It was finally time to have some fun in kayaks. This time we went for 2 person kayak. The bigger the kayak is, the more stable it’ll be in the water. My expectation would just be normal kayaking, but it was way more exciting than that. Our guide was awesome and very knowledgeable about local plants and sea creatures. We also spotted many lizards on the tree! They are really good at hiding themselves and changing their color so they blend in. I’ve never seen a wild lizard like that before, and it was really cool.

Another cool thing about this kayaking was we went through a lot of tree tunnels!

I had really delicious lobster for dinner at Grand Café Key West.

As I mentioned earlier, we booked a glass bottom boat tour for the second day. My first time on a glass bottom boat, but I wasn’t impressed too much, mostly due to the difficulty to get a really nice picture of what’s under the boat. There wasn’t enough light, and the boat kept moving, and it was hard for the camera to focus. It was very impressive to see all cute fishes and also corals, but I didn’t get any good photos from it.

Josh is interested in a shipwreck museum, so we decided to give it a look. It turned out to be awesome. Really cute and small museum, and it has a watch tower which is probably the highest point on the island. The view was great. 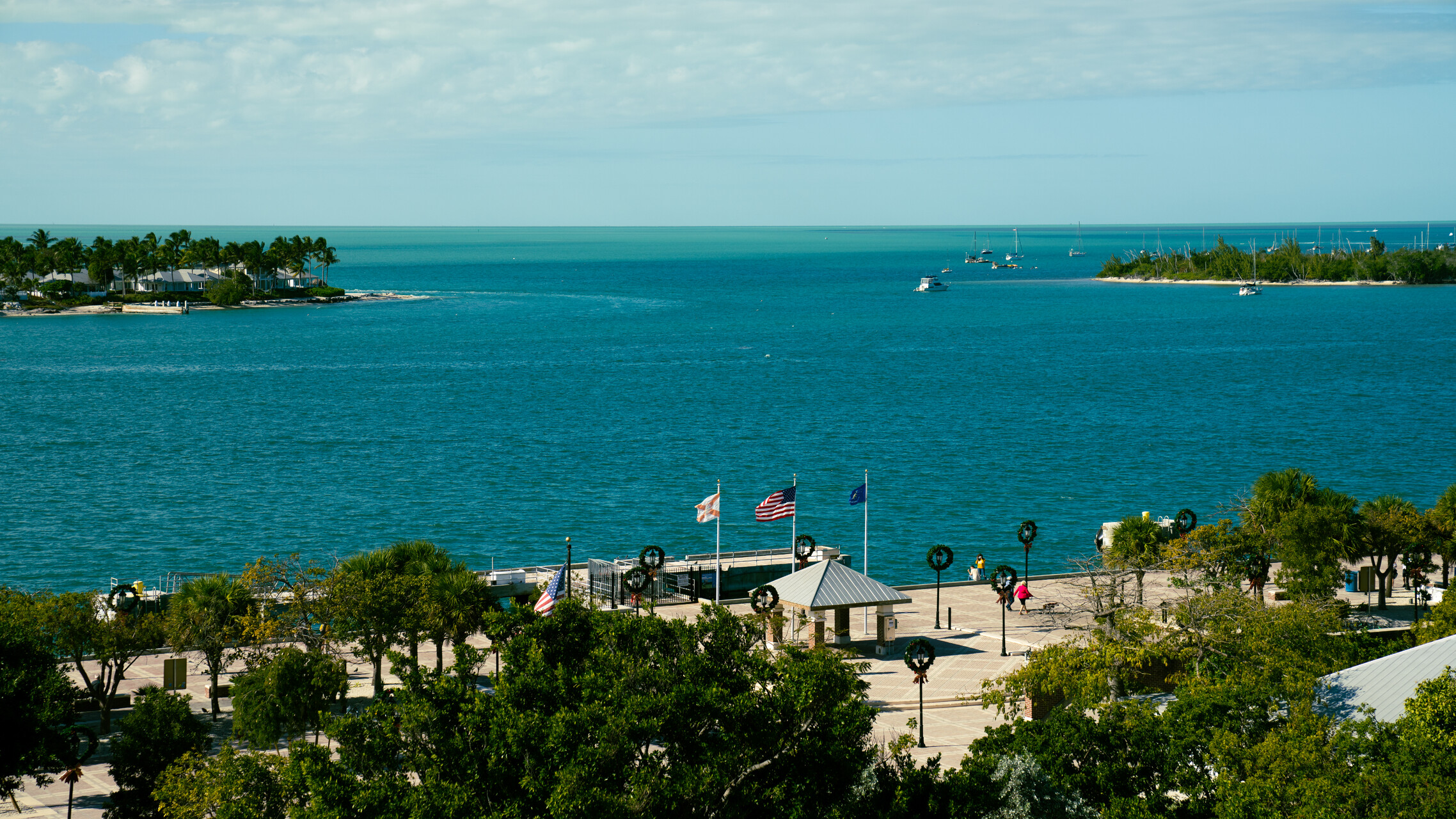 Helicopter Sunset tour was definitely the most exciting thing we did in Key West. It started from a side terminal in the airport. That side terminal seems like to be used for private jet pilots and other airport staff. We waited in the lobby and someone came and called my name. Then he drove us in a golf cart to the helicopter pad. We were greeted by the pilot Brian and two glasses of champagne.

What’s more, I requested to remove the door panels of the helicopter which made it more thrilling. It costs $40 more.

I was a bit scared when the chopper took off, partly due to the maneuver of the aircraft (thinking about roller coaster, but not as fast) and partly due to the strong wind blowing right next to me. I had to hold the camera really tight. But I was able to take a lot of really beautiful photos without the glares and reflection from the glass on the door. That was my first time on a chopper, and it was definitely very impressive and it’s amazing how different and breathtaking the bird view was.

And the lighting was perfect because I booked the sunset tour, which cost a bit more of course. But I think it’s well worth it. Everything was so beautiful in the soft warm light, although we were freezing cold because of the wind.

Our pilot Brian knows a lot about where we were flying. We got to know that a lot of people decide to live on a boat in the ocean because the house price and rent is so expensive in Key West. There are only 3 car dealers on the island. The nearest Walmart is in Cuba. That is an interesting fact that every tour guide will tell you. 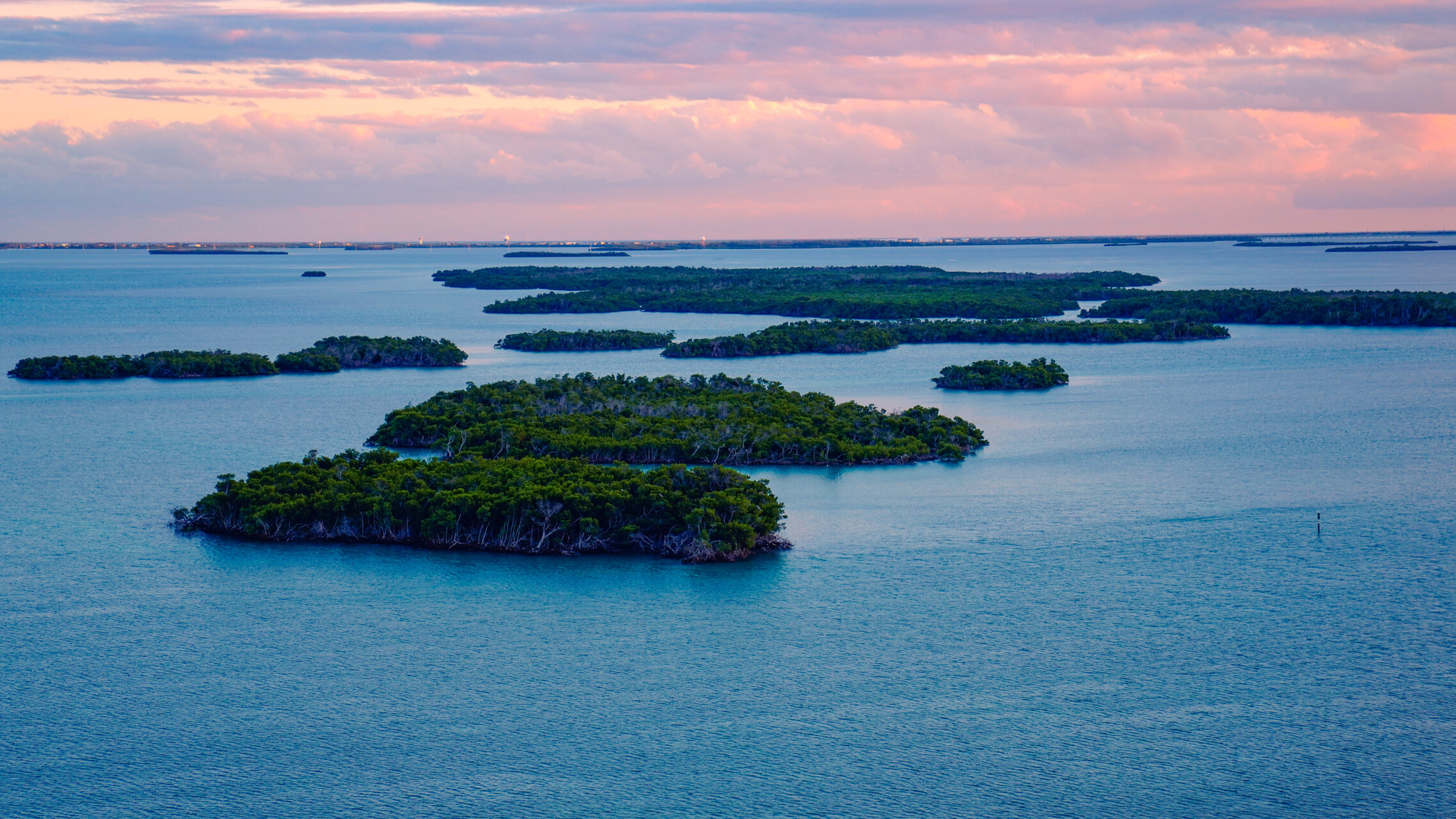 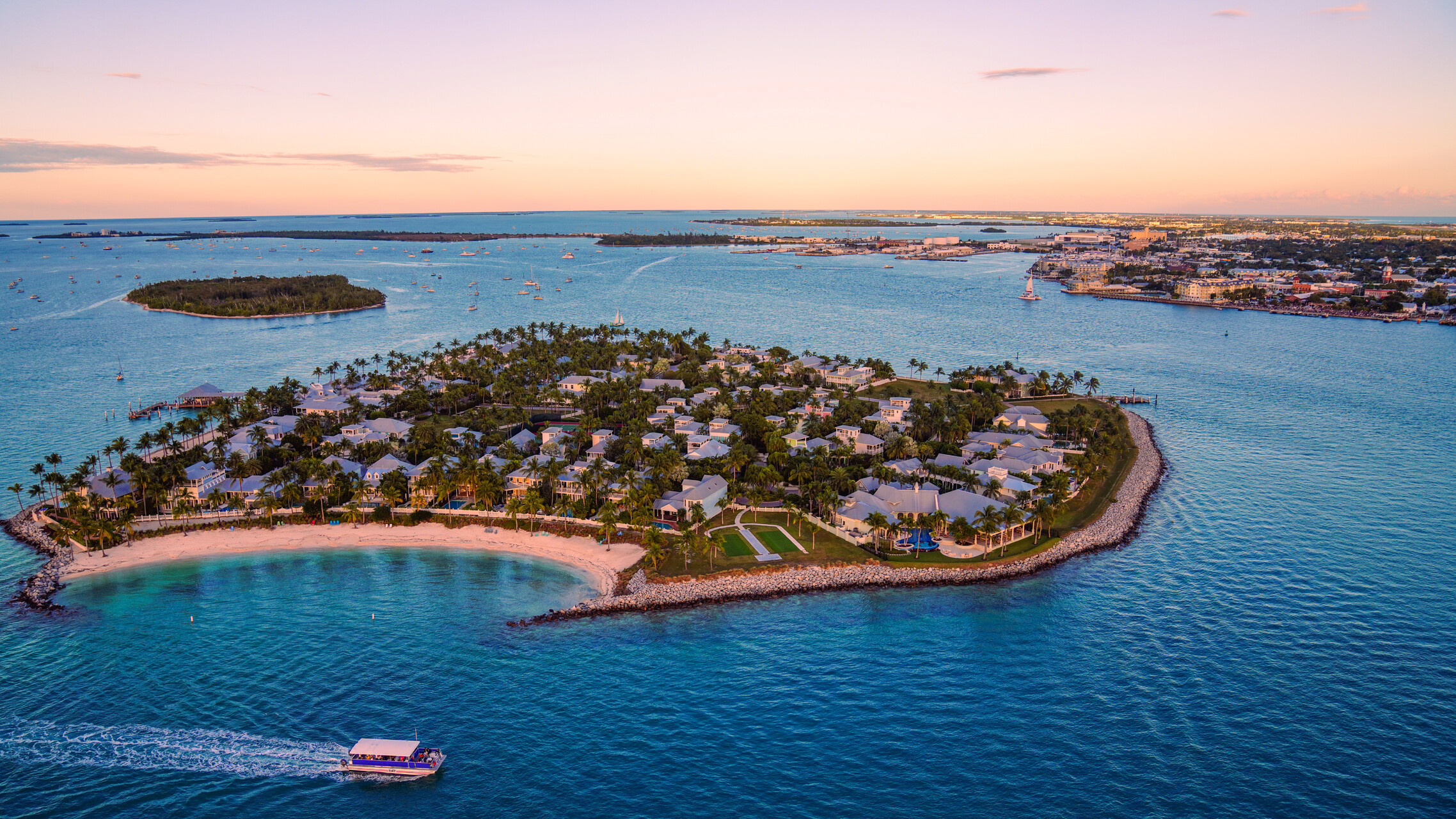 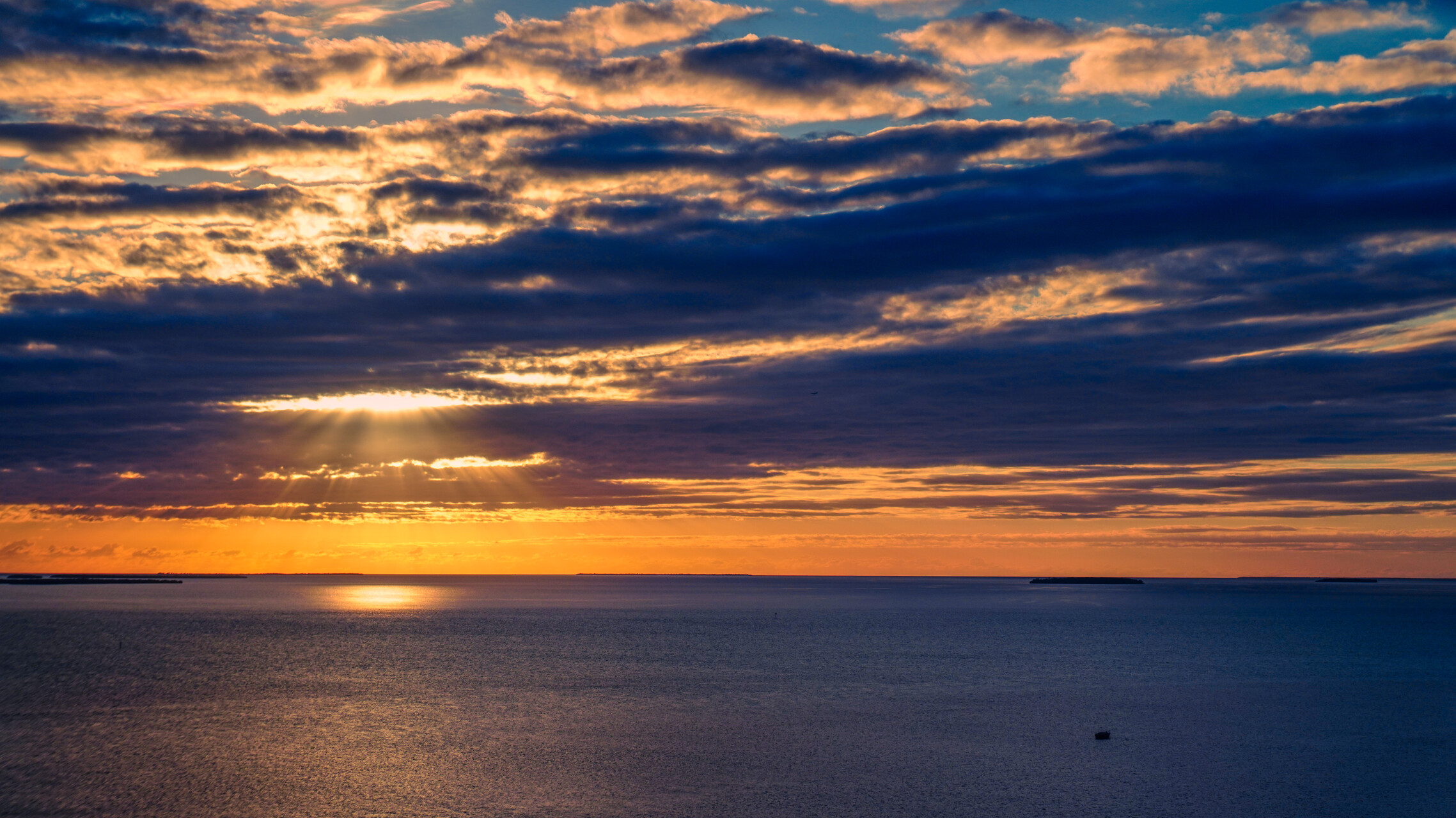 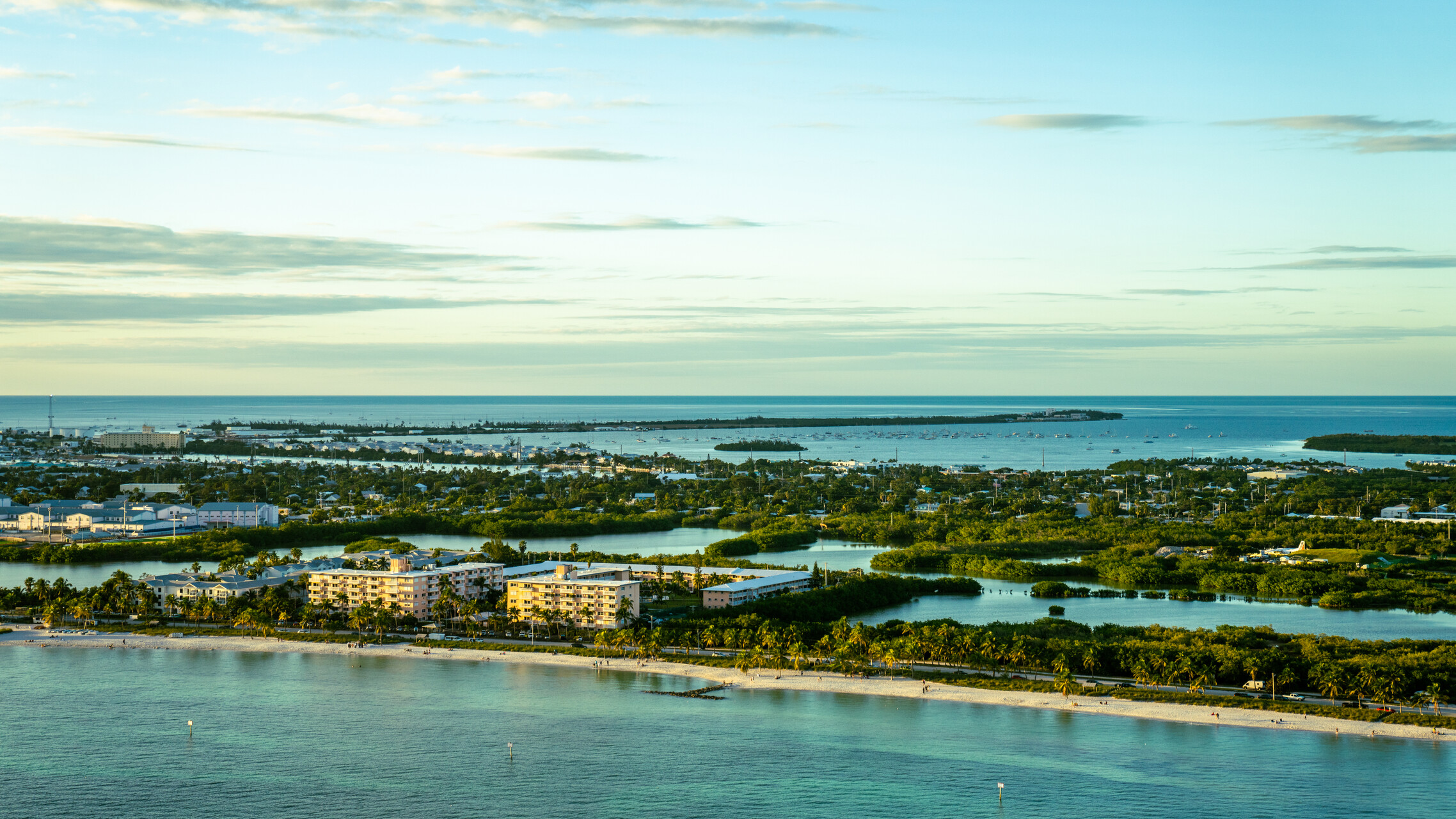 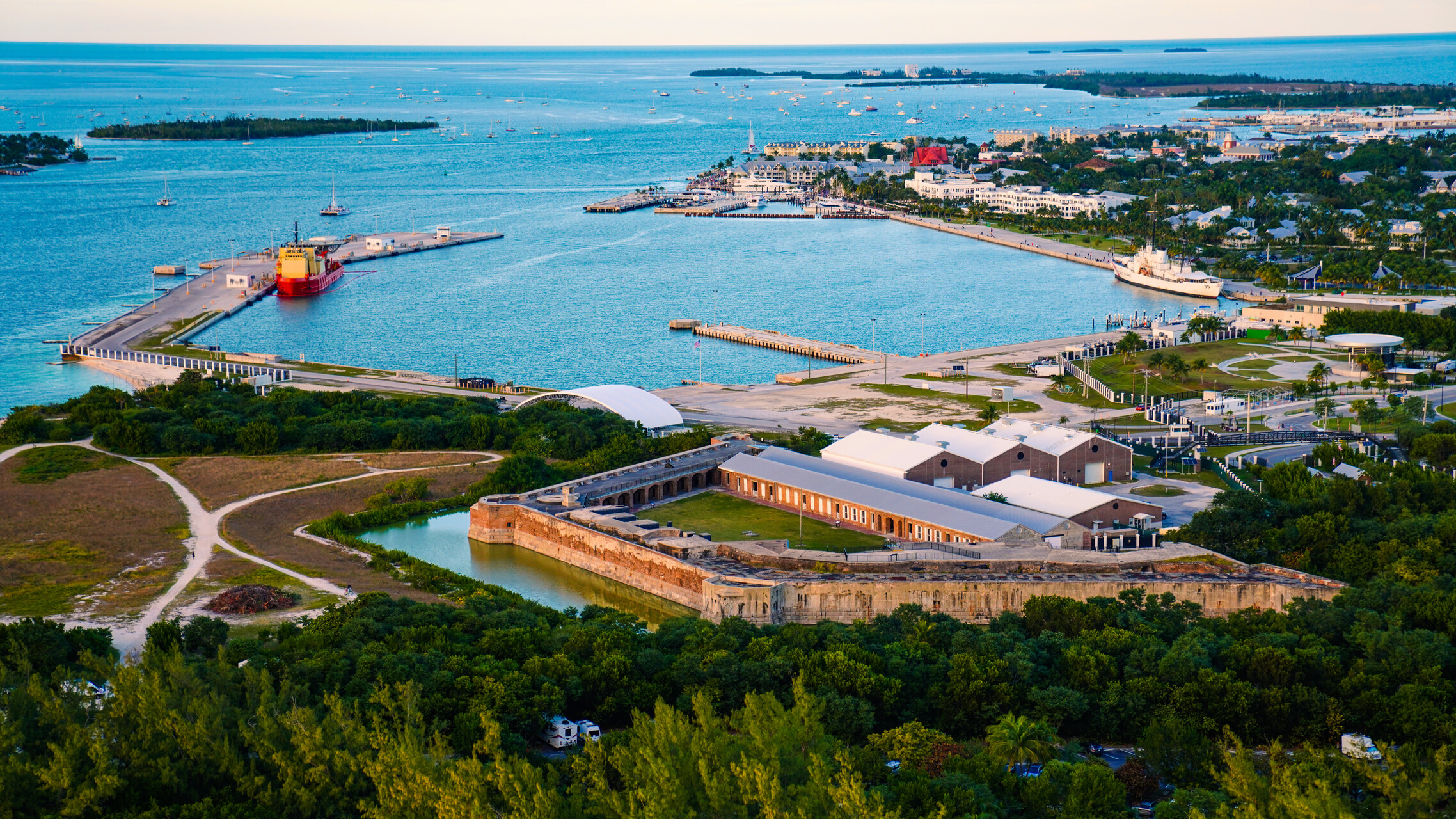 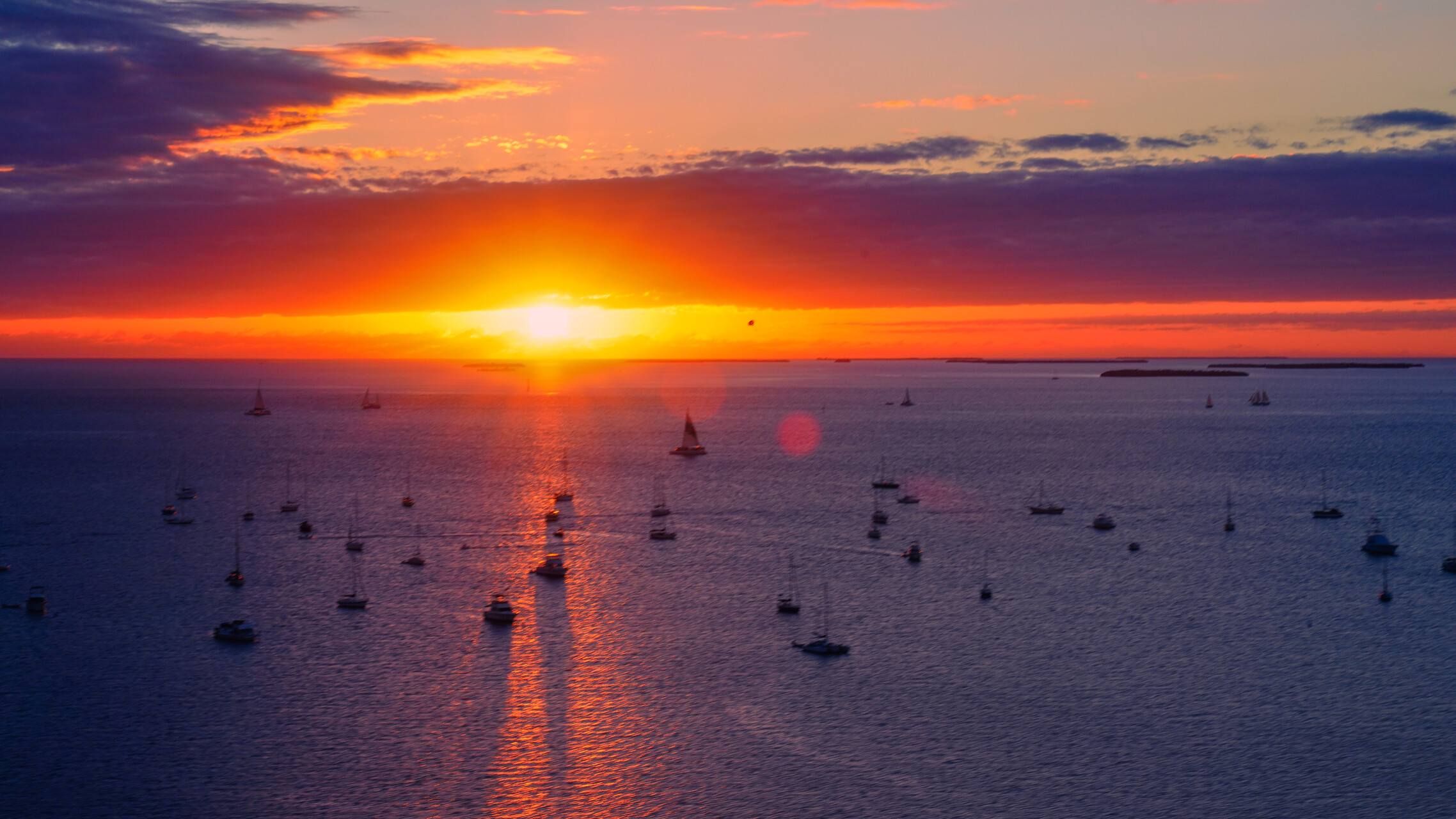 After the ride when I got off the chopper, I was trying to get around it from the back and I was immediately dragged up front by our pilot. The blade in the rear was still running and it must be lower than my height. So if I walked that way, I’d be “chopped” right away!

We also went to the Hemingway’s House. His life was an inspiration for a whole generation of Americans. And his house was peaceful with a lot of plants and a lot of cats. Two cats were just sleeping on the bed in the master bedroom. His writing quarter was nice, with a catwalk to the main house. I feel like I could retire in such a house in Key West.

It was a short time of vacation in Key West. After that we were flying to Orlando for Universal Studio and Epcot. We will definitely go back again because we think there are still a lot we haven’t done on the island, like Fort Douglas National Park. It’s very relaxing and that was exactly what we needed after such a long lockdown in California.

This site uses Akismet to reduce spam. Learn how your comment data is processed.

We’re a gay couple with a corgi – Shabu in Boston, Massachusetts. Every now and then we had some unique experiences and I believe sharing those would make life easier for others.

I’ll share about cars, our dog, as well as our trips all around this country, and photography. We’re all passionate about life, and can’t wait to explore more.